Golden bronze skin has been a popular fashion staple among Americans for decades. People complete tanning sessions for a multitude of reasons such as, wedding glow, prom, or catching a tan before summer arrives to trash the pale skin. Here are a few fun facts you probably didn’t know about tanning:

In 2009, ABC News reported that only one in every three Americans use sunscreen while tanning. This is a concern because unprotected exposure to UV rays is the leading cause of skin cancer. During sun exposure, it is crucial to wear appropriate sunscreen with SPF protection. Also, salons and many retail stores offer sunscreen lotion to use correctly for indoor beds to aid in healthy tanning.

As their mothers did growing up, teens are going for golden skin as well. 2.3 million teens per year are hitting the tanning bed. The most popular times for teenagers is during special school events like prom or winter formal when summer vacation sun exposure hasn’t been available. Teenagers also complete spray tan sessions because their skin tends to be safer from UV rays. Additionally, spray tans are popular because spray tans fade overtime after special events have commenced.

Every year, 28 million people relax endlessly in the sun, hop into tanning beds or, apply spray tans to reach their desired darker skin color. Now, 28 million is nowhere near the billions in America, but out of the 28 million, 70% are white females ages 16-29. According to a 2010 report, people voted that having darker skin is more attractive to them.

Tanning has been a popular American tradition since the 19th century, and, each year, many people continue the tradition to reach their golden glow. If you’re in search of your next tanning adventure, let us know.

We're not around right now. But you can send us an email and we'll get back to you, asap. 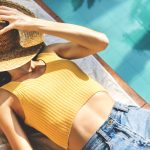 How To Maintain A Great Spray TanSkin Care, Spray Tan